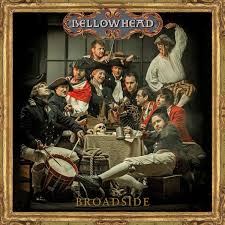 Back in the Ice Age, at my graduate school graduation, I made a speech entitled “The Value of Ignorance.”  My premise was that, if you recognize your own lack of knowledge, you give yourself the opportunity to rectify that lack; those people who firmly believe that they know everything–and we’ve all met them–never allow themselves the opportunity to learn something new.  For my part, I am frequently mortified by how much I simply don’t know; but then I’m excited to be able to find out.  Exploration is my drug of choice.

At this point, allow me to detail my journey to Bellowhead’s newest release, Broadside, winner of this year’s BBC 2 Radio Folk Awards Best Album.  Many years ago, a wonderful friend, musician and ed tech in the special ed department attempted to teach my how to play the ukulele:  his name was Lowell Oyster, and when I wrote about that particular contretemps, I dedicated the piece to him.  When I read that piece at the Maine Writers and Publishers Alliance fall writing getaway, the marvelous Tommy Shea heard it and immediately asked if I knew Oysterband.  I’ve since come to be a rabid Oysterband fan, and if we fast-forward to last summer, I ended up participating (for one day, but what a day) in lead singer John Jones’ White Horses Walk; that evening I attended John’s Reluctant Ramblers show, where I met Benji Kirkpatrick, who, in another part of his life, plays bouzouki for Bellowhead.  Are you following me?  Convoluted, I know, but such are the best explorations.

There is something almost frighteningly attractive

about the Bellowhead sound.  It’s huge.  Well, it would have to be, what with 12 band members, who, between them, play something like 20 instruments (Benji Kirkpatrick alone, beyond the bouzouki, plays guitar, banjo and mandolin).  Don’t let that folk appellation lull you:  this is a band playing folk songs, sure, but along with all their strings and melodeon, they’ve a full brass section, an oboe, occasional bagpipes.  The resulting sound is something like a cross between an orchestra pit and a tent revival, with a bit of klezmer thrown in.  Jon Boden’s vocals, ranging from wild shouting to scratchy whispers and encompassing everything in between, fascinate and spellbind, especially when he and the enormous band play with dynamics.

(According to my friend Roger O’Neill, who was kind enough to dig Burlesque (2006) out of his massive CD collection to start me on my Bellowhead journey, Jon Boden and John Spiers, who had begun appearing together in 1999 or so, found their sound frequently too small for the bigger festival venues.  Apparently, when they tried to think of musician friends to join them to fill out the sound, they just couldn’t stop.)

The lyrics on Broadside?  Odd, narrative, tongue-in-cheek.  Reminiscent, sometimes (as in “Black Beetle Pie”) of something vaguely Sweeny Todd-ish:

Broadside is a party.  I’m glad I was invited, albeit in a circuitous way.  And it’s always good to know that

P. S.  The awesome vid for “Roll the Woodpile Down”: