luxury hotel and golf course.  None of these things, however, proved fruitful, and after pouring money into the estate for a while, each of these users abandoned it to the next efforts.  Now it’s being slowly and painstakingly restored by the National Trust, and though it’s open for visits, only some of the rooms can be viewed.

Unless you’re with my friend Julia, of course.  Julia has done many things in her life, and she talks to everyone.  Which is why, after we’d ridden the golf cart from the visitor center to the house, we entered and she immediately began chatting up the steward.  This led

Julia said this was toned down from the Hare Krishna days.

to someone finding the house manager, which led eventually to our being shown some of the rooms upstairs, closed to the public still while work progresses.  How did this transpire?  Julia, when she was in her early 20s, worked in the house in its hotel incarnation.  One of her jobs in that position was to open and close the heavy window shutters first thing in the morning and last thing at night.  Because we were there at the end of the afternoon, the manager found the maintenance man who carried the shutter key and brought him–and the key–to Julia, to let her close the shutters.

The mansion, as I’ve said, is in the midst of refurbishing.  Designed by Capability Brown, with ceilings and fireplaces by Robert Adam, it has been 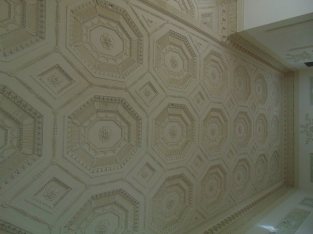 My first ever Adam ceiling!

systematically stripped over the years of architectural elements its owners felt they could sell when they needed money.  One entire room, in fact, had its features–ceiling, walls, fireplace surround, floor–removed to the Metropolitan Museum in New York; Julia wanted to know if I’d ever seen it (I haven’t, but next time I go I’ll know enough to look for it).  Some of the features–the walls in the dining room, for example–were all tarted up  during the tenure of the Hare Krishnas, who apparently enjoyed jarringly brilliant colors.  Upstairs, where the hotel guest rooms and owners’ quarters were, there were weird modern additions:  a room with several toilets against a wall, for instance, and one room with an enormous hot tub smack in the center, facing a bastardized fireplace.  Julia told several of the stewards we met about the room at the top of the house with the giant window for viewing the ritual conjoining of members  in the next room (“Lalalalalalalalala,” said one of the stewards, jamming his fingers into his ears); but the top floor was closed off, thank God, so I didn’t have to go look. 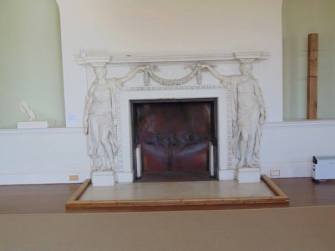 One of the great sadnesses we found in our wandering was in the long gallery, which still contains some Adam elements, as well as a gorgeous caryatid fireplace designed by J. Wilton (Julia also tells a story of saving many of the fireplaces, including this one, from being stripped and sold by a previous owner by telling him how much it would cost in reparations should he do so, because the property by then was listed).  What made the room so sad was its magnificence, and how the cornices, for displaying sculptures, were being used to display some of the most unattractive modern art we’d ever seen.  One piece in particular looked like a giant fountain of fuchsia vomit, pouring from the cornice.  With the neo-classical proportions and decorations of the room, the choice of display was garish and jarring.

After we’d been given the opportunity to close the

Julia pointed out these columns in the church in particluar.

shutters in the saloon on the south side of the house, someone radioed up to the visitor center for the golf cart, but it never came.  Julia and I eschewed the road, and climbed the long hill to the churchyard.  We paused to look into St. Mary Magdalene Church at the top of the park, beautiful in and of itself…but then it was time to head into Worcester to find Roger, Julia’s partner in crime, who had taken some days off to visit more ruinous things with us.

Postscript:
Walking up the park towards the church in the late afternoon light, with the grass tall and green around us–I felt as though I were meandering through a Jane Austen novel.  Sadly, I was dressed all wrong for the part, and there was no ha-ha.