On the Roundabout Hotel

Three years ago, at the tail end of a school trip to London, I stayed behind after everyone else had flown home, and went to Fareham to see Oysterband.  When I was there, I stayed at the Roundabout Hotel, which I had found online.  Last month, when I went to the Wickham Music Festival, again to see the Oysters, I booked into my old haunt when camping plans fell through.  Six nights I stayed this time.  By the end of the week, the place felt like home.

To get to the hotel, if you’re me, you leave the Fareham station, turn left, 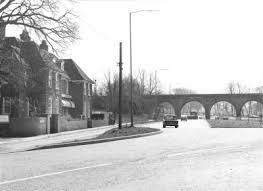 and walk for a little more than a mile–right through the center of town, where vehicular traffic bypasses the pedestrian shopping heart of the place to pick up again on the other side.  Past the pasty shop, where work vans idle on the double yellow at noontime while people line up to get takeaway.  Past the prep school.  Past the orthodontist.  Onto a footpath which attempts to avoid the roundabout and fails:  when you come out of the trees at the end, there is the Roundabout Hotel, waiting where it has waited for a hundred or so years.

My room was #24, at the top of two sets of stairs:  the second set, to the second floor–or third, for US-ers–led to my room and no other.  My own private stairway!  The window overlooked the

From the top of my staircase!

roundabout, and the exit leading north, toward Wickham.  The bed was large and took up most of the space.  In the corner was a small shelf with the tea things, including the electric kettle.  When I checked in, there were two teabags and four tiny containers of milk.  Each day I used the teabags and didn’t touch the milk.  Each day, the phantom chambermaid (whom I never saw) replaced the teabags, and added four more little milk tubs, until the third day, when she began leaving four teabags and four milk tubs.  I used the teabags.  I began building a tiny milk pyramid with the tubs.  I like to think the chambermaid saw the humor in the construction, for she always left four containers next to the tower, so I

could build up and out.  Six days of this…until my friends Lesley and Marg, staying at the other end of the hotel and down one floor on my last night, ran out of milk, and I smuggled some down to them.

By the sixth morning, the nice young waitress in the dining room always brought me the full English with tomato, no beans, and scrambled eggs.  And a steaming teapot.  Without my asking.  Some mornings I breakfasted alone.  A couple of mornings Steve and Lesley were

there, having the full English with beans, no tomato.  And the one morning Marg and Lesley (different Lesley–my English world is peopled with Lesleys) were there, Marg, who is Canadian, got down before the rest of us:  when she told the waiter she was waiting for friends, he said, “Oh, Anne?”  We North Americans, you see–we must stick together!

I like the Roundabout.  John and Boff and Tom and Rowan and Al and Fran were all staying in the middle of town in Fareham, at the Lysses, which, when I met them there, made me feel gauche and outclassed.  The Lysses is beautiful,

The Lysses. See what I mean?

with soaring lines and columns and deep carpeting on which various employees and guests glide silently.  The Roundabout is, compared to that, definitely more in my league:  dark beams, some real, some fake.  Worn carpets.  Stairways that go almost nowhere.  Downstairs, a pub, where, on Saturday night, there was a band, the bass from which thumped up the two stairways to rumble my big old bed.  Plumbing that clanked away while I waited for hot water to make its journey to the top of the hotel.  And outside my window, two floors down, the roundabout from which it got its name, where, on my first night there this summer, emergency vehicles wailed their way around, lights flashing–which made me feel oddly at home.