On Flyin’ It to Portland with Leo and Anto 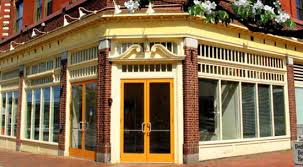 It’s been a month since I saw Leo Moran and Anthony Thistlethwaite in Palmer, Massachusetts on the inaugural weekend of their U.S. tour.  Since then, they’ve landed in venues in New York, New Jersey, Pennsylvania, New Hampshire, as well as several more in Massachusetts.  Last night they came to One Longfellow Square in Portland.

I’d never been to the hall, though my partner-in-crime this time around, Michelle, frequents the place.  It was she who chose our seats

in the balcony, where we could watch the show and eye the crowd:  she said the sound was better up there.  The house was full–the place seats around 200–and the audience, for the most part, were die-hard Saw Doctors fans;  Michelle knew a large number of the attendees personally.

Leo and Anto did not disappoint.  The show has evolved over the past four weeks:  the stories have gotten tighter, the playlist has been reworked (though anyone familiar with Docs shows knows the playlist is never the same two nights running).  The duo’s vocals have gotten stronger as they’ve ironed out any wrinkles, adding in and subtracting songs.  Some things remained the same, though.  “Shamtown,” which I think is my favorite song of the show (and on the CD), still graced the first set.  My way-cool sister will be pleased to know that the audience participation in “All Credit to the Credit Union” was still directed cheerfully by Anto.  The story of high times with

Bob Dylan was still part of the schtick, though the telling had been expanded to included Leo’s brief imitations of the Eurythmics and Blondie, among others–and the story also now involved a dollar bill as a prop.  Michelle’s favorite Dylan song, “Most of the Time,” still followed the telling of the evolved story.

As in Palmer, one of the most wonderful parts of the show was the showcasing of Anthony Thistlethwaite’s saxophone.  In the small performance space, the sound swelled and sang and was magical, whether Anto was punctuating Leo’s vocals, or swooping out into crescendo-ing solos.  Anto’s mandolin was also a joy (but I’m a sucker for a mandolin–everyone knows that).  As always, the sheer energy Leo brought to the stage, with his leaping about, his comical facial expressions, and his wordplay with the audience, made that audience his from

Okay, I know I wasn’t supposed to take pictures. But I did. Two.

One of Michelle’s friends at the show, Sparky, spoke about how he’d asked people what they expected from a Leo and Anto show:  were they there hoping to see Saw Doctors material, or something different?  Whatever the answer he received, the audience at One Longfellow Square got both:  some Doc songs done differently (perhaps they way they were originally imagined), some different songs entirely.  This is not a Saw Doctors show.  But it’s well worth seeing.  Twice, if you’re me–more than that, if you’re Michelle.

“Clare Island” closed the encore.  The duo sang; the audience sang.  Then Leo and Anto unplugged their amps and left the stage, still playing guitar and sax, and wandered through the room, up one row, under the balcony, and down the next row.  Michelle’s choice of seats, especially then, was a good one.

The bacon mac ‘n’ cheese at LFK across Longfellow Square is highly recommended.  As is the breakfast stout, even at 6 in the evening.  Just sayin’.