I think every kid must have some sort of fantasy about castles.  About living in one, about fighting for one, perhaps even about being held prisoner in one.  Any kid who has ever seen Chitty Chitty Bang Bang must have the castle of Neuschwanstein imprinted upon her imagination: 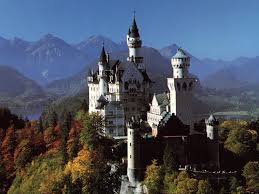 I had the great good fortune to grow up within a few miles of a castle.  More or less.  The tower of the Casco Castle Hotel, in South Freeport, was the only thing that remained when I was a kid, the main portion of the building having burned down in 1914.  However, from the time we were old enough to ride bikes, we’d make our way from Grover’s Crossing and down toward the harbor, then veer off and climb the path up onto the granite ridge where the ruins remained.

In the after photo above, you can see the window at the bottom right where we’d scale the stones to enter.  Once inside, it was possible to climb further, into the small chamber to the right.  Howard, one of the nine Nichols kids from Grover’s Crossing, claims to have climbed up as far as the cross-shaped windows; and there were stories of people climbing higher, though I never saw them do it myself–there were even stories of people falling, and, as the kids whispered in awe, breaking every bone in their bodies.  The castle tower was on private property, and we all were, of course, trespassing; the owner did not like it, on account (I know now)  of insurance liability concerns, but we kids just thought he was being a jerk…because we were kids.

So that’s where my love affair with castles began, and of course my love is tinged with the romantic:  I prefer my castles ruinous.  Since then

I’ve been to castles in England and France–Windsor, for example, and Versailles–and breathtaking as those were, they were intact, and not exactly to my taste.  Of course I loved exploring them (the parts open to the public, in any case), but always, in wandering about, I found so little left to the imagination.

How, after all, can one imagine being a knight in shining armor, or a feisty princess (none of those damsels in distress for me, thanks), when one is constantly followed around by security, are thoroughly frisked and scanned on entrance and shunted through the gift shop upon exit?  Where’s the romance in that?

Which, I think, is why my favorite castle of all time is Tintagel, in North Cornwall.  You want ruinous?  This place is perfect.  To get to the castle, you must take a footpath out of the village toward the Celtic Sea; once you’ve paid admission, you need to hike up another path to a bridge where you can turn left to climb a mountain of steps and explore the mainland side of the castle, or turn right,

cross the bridge, then climb yet other stairs to the island side (these two parts of the castle were once one, before the tides wore through the cliffs and split them apart).  Though I was there in July, on a brilliantly blue and sunny day, one of the only two National Trust people I saw told me that in February the wind blows off the sea so harshly that it’s impossible to stand up straight on the island.  Imagine the cold and the loneliness then…and of course, that’s the keyword:  imagine.  So much more romantic to be able to

imagine the way into stories about a ruinous castle, especially one that’s the legendary birthplace of that most romantic of kings, Arthur.  Then, of course, there’s the imposing way this castle towers over the Haven, and dwarfs the village, back over its shoulders.  This is a castle that is truly magical.

Not that I’ve entirely switched my allegiance from the ruinous castle of my childhood–not at all.  How could I?  Casco Castle is still the tower in my dreams.  Now, however, that I am so much older, I give myself nightmares about climbing it.  I did that?  I must have been one stupid kid.  I’m just grateful that I was not one of those fabled people who fell and broke every bone in my body.

People can still fall from the cliffs at Tintagel.