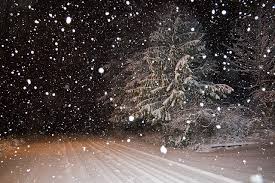 I woke up around 1 in the morning and just listened.  There are sounds in the winter house which are reassuring–the sound of the furnace kicking on, for one.  Where I live, though, there are other winter sounds which form the tapestry of the night, especially when inclement weather is drawing on along the mountains:  first and foremost is the sound of the snowplows on the road.

This house is at the intersection of two main state roads, and is quite close to them–built at a time when horses and wagons ruled the world.  As such, it is a house which absorbs road sounds; I’ve lived in it so

long that I’ve absorbed the sounds as well.  How can you stand the noise? people frequently ask.  After all these years, the answer comes easily.  I’ve learned not to hear it.

Which is why, of course, in the night when the National Weather Service has posted a winter weather advisory, the absence of the sound of state plows, with their hollow booming along the road, wakes me.  It must not have started yet, was my thought in the middle of last night.  When I crawled out of bed to look out the windows, the roads were bare…but dark and wet.  Black ice.  A car zipped downhill past the corner store across the way, and I tensed:  if that driver kept up that speed along the rises and dips toward Troy, he’d be off the road in no time.  As I said, I’ve lived here a long time.

By the time I got up this morning, for real, to get ready for school, there was snow.  As I turned on lights and fed the dogs, I heard first one plow, moving west to east, then a second moving north to south.  Outside, the orange strobing of their lighting.  In the shed, I listened to the sound of precipitation on the roof:  clicking.  The snow had changed to ice.  Soon enough, the phone calls establishing that the districts–both mine and the heathens’–were closed for the day.  I sat and listened for the plows for a while, before other things took my attention.

It’s a comforting sound, when I think about it.  In it resides a reminder that

there are people out there who are taking care of things, who are doing their best to make the world safer.  At the same time, it’s lonely.  Those men and women who are riding the roads in those big trucks are all alone in the dark, doing their jobs while people like me are sitting inside, warm and dry and drinking coffee.  My new friend Marg, with whom I stayed in Huntsville, Ontario, and with whom I went to see Oysterband, drives a plow rig through southern Ontario:  a tomato, she calls her truck, since it’s big and red; she’s on the road in the winter (from the first of November, actually) spending long stretches away from her home and her husband and her big ol’ Newfie.  Because of her, and because of the drivers who pass back and forth before my house, I have a real appreciation for what those people do.  So when, at 5:30 this morning, two of those trucks crossed paths at the intersection, and the drivers held a conversation in shouts so loud that I could hear their words from my living room, I didn’t mind.  I wished them well.

Many years ago, when I was going through a spate of plow guys for my driveway–they would quit and not tell me, or they were injured and couldn’t tell me (true that: it happened to not one but two plow guys), I 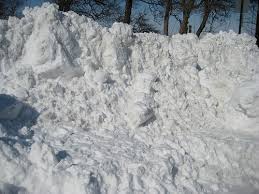 went out one terrible afternoon to find my driveway blocked with a mound of snow and ice, frozen solid.  I ended up standing atop that pile with a pick and a coal shovel, cracking and shoveling it every which way, in an attempt to clear a path to escape for the car.  In the midst of my furious digging, a state plow stopped, and the driver shouted at me.  You know I’m just going to plow that in again?  I knew, I told him, but I had to break the pile down at least a little bit.  The poor man just shrugged, then told me to get out of the way–and with that, he took that big old orange double-winger right up the driveway to the garage, backed out again, and took off.