On the High Seas

The Elizabeth Ann to Monhegan

The seas were running high on Saturday, when my way-cool sister Susan and I went out to Monhegan Island for our annual fall hiking extravaganza.  In the morning, when we boarded the 10:30 boat at Port Clyde, it was dead-low tide; the gangplank loaded passengers onto the upper deck.  This is where we usually sit, atop in the stern–neither of us do well in the cabin.  Sadly, the boat was fully laden with passengers and their attendant belongings; the ladies at the ticket counter told my sister that everyone and his brother was going over in the morning, but most were staying through the weekend or even longer.  Thus we had to go below.

We opted to take seats in the stern, outside.  It felt strange to have a deck overhead, but at least it was still open above the wales.  I sat to one side, with my feet on a cleat above 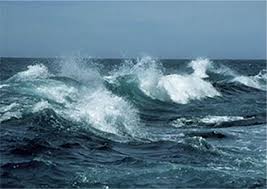 the scuppers–and it was a good thing, that cleat (it was also a good thing I had waterproof hiking shoes on, but that’s another story).  Once we headed out of the shelter of Port Clyde and into the open ocean, taking the outward route that stayed away from islands and shoals because of the tide, the seas grew rougher.  And rougher.  The captain of the Elizabeth Ann on this trip, a young bearded man named Alex, steered that boat straight into each rolling wave, and had we been inside the cabin, Susie and I would have been sick almost immediately; some people were, and they fell under the charge of the teen-aged mate, an unfortunate boy my sister insisted upon referring to as Kyle (“he just looks like a Kyle”).  About halfway out to the island, after we’d sailed up innumerable swells and crashed back down into innumerable troughs, the crew brought everyone in from the bow seats; I could see, looking up ahead, the waves wash over the bow every time we crested a wave and fell into the trough beyond it.  Even in the stern, waves splashed over the wales, washed in through the scuppers, across the deck, and out again.  Susie, wearing shoes which were not waterproof and having no place to keep her feet above deck, was soaked quickly.  Every once in a while the boat lifted so high out of the water I could hear the screws turning against–nothing.  The power of the wind and the waves was enormous, frightening.

I was forcibly reminded of the time, a zillion years ago, when I first learned the power of wind and waves.  One high-school summer my friend Janet attempted to teach me to sail.  Her family had a house out on Chebeague Island in Casco Bay; they had a couple of sailboats, including the Machina, in which Janet was misguided 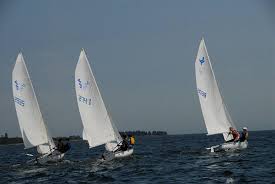 This is definitely not us.

enough to believe she could teach me.  I immediately understood the part about ducking under the boom when she tacked; I had a bit more trouble working the rudder, because it was counterintuitive:  I wanted to steer as though I was driving a car.  While we were out in the basin just off the Chebeague Island Yacht Club, the wind started to pick up.  The sails billowed and luffed; Janet fought them and I was absolutely no help.  Finally she instructed me to lie flat on the bow and catch the mooring as we sailed by–but we were moving at such a clip that at first pass I couldn’t get a hand on the thing; and on the second, I hooked it and it nearly ripped my arm out of the socket.  As a last resort, Janet finally turned the bow in toward the sand and ran us aground.  We ended up attempting to walk the sailboat around to the mooring, an endeavor which was not without its own difficulties, as the taller of us (me) had to hold the hull on the deep side, while the other fought the wind and  waves which were constantly pushing the boat outward.  I remember little of that walk, save for Janet alternately shouting Hold the boat!  Hold the boat! while calling for Malcolm to bring the launch and save us all.  We did not drown.  It was miraculous.

I’ve never attempted to learn to sail since.  I limit myself to motorboats–or ferries such as the Elizabeth Ann–which someone else captains.  I will admit to a marginal bit of panic Saturday as Alex steered us through the ten miles of heavy seas and into the dock at Monhegan.  Would we make it?  Susie told me later she thought she’d be sick; but the obviously seasick elderly woman who stumbled out onto the stern with us

helped her hold it in.  I kept finding my eyes drifting to the girl in flip-flops who held the rail overhead and stared blankly at the horizon for nearly the entire hour.  Then I’d turn back to the waves and the occasional salty splash in the face.

The trip back in to Port Clyde on the 4:30 boat was slightly less rough, it being high tide by then.  We took the more sheltered route through the islands, as the water was high enough to cover any shoals.  Even so, there were still waves enough to cause the ferry to yaw.  At least once Susie and I were nearly  thrown from our seats on the upper deck as the Elizabeth Ann heeled over into a wave.  In the pilot house we could see Alex at the wheel, and when he corrected course, we held our hands out, as though holding steering wheels:  Drive like on TV!  (My brother used to say that, and jerk the car’s wheel back and forth, when we were all stupid teen-aged drivers.)  At one point, Susie started singing the theme song from “Toonces the Driving Cat.”  After that, it only got worse.  We think Alex assumed we were making fun of him, and sought his own petty revenge.