On van Gogh and Fear

Recently I received word that a poem I had written, an ekphrastic piece entitled “Cafe Terrace at Night” after the van Gogh painting, was accepted for publication in I-70 Review‘s 2012 issue.  This was a poem that had its germination in an exercise I did in the period 6 writing class:  I offered the students a plethora of art posters, some mine, many gleaned from the collection of my awesome friend Karen; each student had to choose a picture which somehow spoke to them, and write.  I chose the work by van Gogh, because I wanted to use the exercise as a way to allay my fears.

Vincent van Gogh has always frightened me.  It’s the violence of his art, which, if the biographies

speak true, echoes the violence of his spirit.  The art alone is enough to indicate that van Gogh was a man of overpowering passions, who saw things in ways that most of us don’t, and few of us truly understand.  The world lit him on fire, and the world burned him badly, too.  Those blazing colors!  My first experience of his work was–as is the way with most of my students–in an art print:  my way-cool older sister had a framed print of The Starry Night in her living room when she was first married, and I remember feeling frightened to the point of physical repulsion by it.  I think the impetus for that reaction was the power of the wildly whirling sky–in the face of the insignificance and–dare I say it?–the inadequacy of the town in the distance.  What did van Gogh see in the relation of the universe to us, the people in it, and our petty lives and concerns?  His truths were not the kind I wanted shown to me when I was a teenager.  I’m not sure I want them shown to me now. I had an even stronger reaction when I first saw a print of The Night Cafe.  Again, a print–not even the real thing–but my reaction was still visceral.  I was afraid of that room, in a way even now I can’t explain.  It had something to do with the brilliant emptiness (even though there are actually people at the tables around the periphery of the cafe), but more, with the skewed perspective:  the odd angles of the room itself, and the hulking monstrosity of the pool table at the center, shadowed as oddly as it is by the blazing ceiling lamps.  There’s something so forcefully wrong about this place–but the wrongness is emotional.  Again, I needed to get away from this painting.

A hundred or so years ago, when I first became the denizen of my classroom in the C-wing, I found a handful of art prints in the closet there.  One of them was of Portrait of Dr. Gachet, and despite my fears of the artist (and perhaps because, as a beginning teacher, I had little enough of interest to hang on the walls), I stuck him up over the blackboard at the side of the room.  I was a bit nervous of him, but I did not have quite the violent reaction I had to 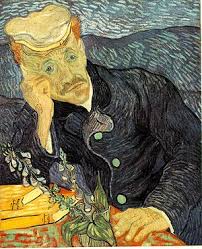 The Starry Night or The Night Cafe.   Still, there was something heart-rending about him, as though he had given up on something, as though he were exhausted, beyond sad.  I tried not to look at him…but as is the way with secret fears, I was fascinated by his face.  Haunted by it.  I later learned that the subject had been van Gogh’s physician during the artist’s last hospitalization, which explained so much to me:  who wouldn’t have been exhausted dealing with the passions of Vincent van Gogh?  My own fears and exhaustion were evidence of his power–after all, I felt this way and I was a hundred years removed, experiencing the man through prints of his work, not even the real thing.  Imagine sharing a room with him.  A table.  A bottle of wine.  I get claustrophobic just thinking about it.

At last, though, a few years ago, I had the chance to visit some of van Gogh’s paintings in the Musee d’Orsay with my friend Karen (who loves Vincent, I know, and has claimed to sort of understand my irrational fear).  Up close, the paintings have texture, something viewers are deprived of when their only experiences are reproductions.  Van Gogh’s textures are as disturbing as his colors, as his perspective, as his visible brush strokes.  Standing off to the side while viewing a painting like Portrait of Dr. Gachet is to see the thickness of the paint, to almost feel the force of the daubs of color.  The textures add to the vibrations these paintings cause in the air surrounding them.  I can feel the power of the dead man.  I can feel the passion.  The atmosphere hums.  The hairs on the back of my neck stand up, and my skin prickles.

I am still afraid of Vincent van Gogh.  As I get older, though, I realize that I am becoming mesmerized by his work.  I can’t run any more.  It’s drawing me in.

I can’t say anything else about the poem.  You’ll just have to get hold of a copy of next year’s issue of I-70.