On Breakfast at S & S

I am a big fan of breakfast.  Not the toast I usually have, though I was joking with Jim Prescott during the weekend I spent with him and his wife, my friend Brenda, that I live for toast.  No, I’m a fan of the big breakfast:  bacon and eggs, or pancakes and sausage, or French toast.  Bagels and cream cheese.  Ham and home fries.  Scones and clotted cream, even.  Serious food.  I’ll even eat the canned beans they give you in England, if you know what I mean. 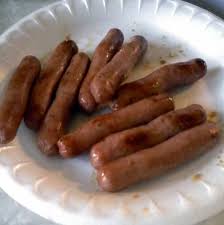 Which, of course, is why, at my house, we’ve had a big Sunday breakfast for as long as I can remember.  Usually involving an enormous amount of bacon, since my heathenous children do not like sausage (how can anyone not like sausage?).  It’s just about the only day when the kids and I are together and not rushed to get off to school and various other places, so we can sit and eat and laugh–those heathens are better than TV.  Nowadays, though, they are getting harder and harder to pin down, even on Sunday mornings.

...though we were here in the morning, of course...

S & S Restaurant and Deli has been in existence for nearly 100 years.  They don’t limit themselves to breakfast, of course, but that doesn’t make them any less of a destination on Sunday mornings.  In fact, when we got there at around 10:30, the place was full to overflowing.  We waited for a table, standing out in the deli, where I spent my time checking out the lox and blintzes and knishes in the coolers.  None of which I wanted for breakfast…it wasn’t until I’d spent some time poring over the choices on the menu that I was able to make up my mind.

Brenda went for a bagel and cream cheese with bacon.  Jim ordered an omelette.  I wavered back and forth while the waitress poured water and coffee and fresh-squeezed orange juice; I finally chose the croissant French toast–with sausage, of course.  How could anyone lose with croissants and French toast in one?  Two of the best breakfast foods ever, combined into one luscious concoction?

As I said, the place was jam-packed.  If you are into people-watching, which Brenda, Jim and I are, this was the perfect opportunity.  Because we apparently rolled in at the head of the morning’s second wave–so said our waitress–it took awhile for our food to make its appearance.  Our table was in the center aisle in the second section of the dining room, between two rows of booths.  To my right, a group of women of a certain age, drinking Bloody Marys with their breakfast.  To my left, a small family–mother, father, baby in a carrier.  Everywhere, scraps of disembodied conversation.  Clinking of glassware, silverware.  If there was music piped in for ambiance, we surely couldn’t hear it (Brenda said we’d have to go across the street to the Regattabar, where Yoko Miwa was playing a jazz brunch, for good music).

It tasted much better than it looks...

Still, breakfast was well worth waiting for.  I’m glad I ordered the croissant French toast, if only for the experience.  With whipped butter and maple syrup, it was delicious.  The only drawback was–as the croissants were split, then coated with egg and cooked, the crusty sides of the croissants were a bit tougher than your average French toast.  The sausage was standard breakfast sausage (my favorite kind is the English kind, slightly bland and bready–just call me weird there), but the tiny fruit cup on the side was what really tickled me…except for the part where Jim got blueberries and I didn’t.  That seemed somehow unfair.

All in all, I think I won’t do the croissant French toast again.  Perhaps plain?  Brenda likes the S & S version of potato pancakes:  maybe I’ll try those?  Because, of course, Brenda keeps telling me I’m welcome in Cambridge anytime…and I think she may have figured out that, if she bribes me with a big breakfast, I’ll be down more often.  Perhaps even more often than she would like.