That would be the one word to describe the atmosphere of Ragged Kingdom, the long-awaited second CD collaboration by Oysterband and June Tabor.  From the cover photo, muted to near-sepia tones save for a few flashes of blood-red (one of which immediately draws the eye to June Tabor’s position high on the stairs), in a setting vaguely reminiscent of an ancient temple of some sort, and with a somewhat Bacchanialian feast of fruit and wine which is more puzzling than revealing (three glasses?)…to the liner notes, which read We have long been fascinated the by mystery, magic and mayhem in traditional song.  But the impulse to tell strange stories never goes away:  we are indebted to the creators and carriers of all these songs...the feeling that we’re dealing with another world, a shadow world, never quite goes away.  The songs themselves, both traditional ballads and more recent compositions, all take as their subject matter ghosts: of people, of relationships, of betrayal, of the past–the kinds of things which cling to us like cobwebs.  Since my first listen to Ragged Kingdom, these pieces have replayed themselves in my head.  They’ve been hanging with me.

It’s difficult to decide which of these 12 songs is most haunting.  The CD launches with a rendition of “Bonny Bunch of Roses,”  driven by Alan Prosser’s insistent guitar, in which Napoleon Bonaparte’s enormous army is defeated in his quest for Moscow by snow; June Tabor’s voice in this song (which I first heard in all its glory in the live stream from the Shrewsbury Festival) is strong, clear, and breathtaking.  Other pieces which seem driven are the dark Somerset ballad “Judas Was a Red-Headed Man,” where the Oysters pull out the electrics behind Tabor, and provide eerie faraway vocals, all pushed insistently by Dil Davies’ percussion.  Ray “Chopper” Cooper brings a furious cello to Dylan’s “Seven Curses,” a ballad of betrayal where a daughter sleeps with a judge to save her father’s life–and curses that judge when he reneges on the bargain.  Fury is the force behind June Tabor’s vocal in P. J. Harvey’s “That Was My Veil”–a fury that builds until the final word lies, low as it is, absolutely combusts.

Ray Cooper, in conversation at the Gosport & Fareham Easter Festival in April, described the process of song selection and ordering on a CD as an attempt not so much to build a narrative arc, but rather to establish an atmosphere.  On his and the Oysterband

Facebook pages, John Jones hinted throughout last winter at the process June Tabor and the band used to choose among all the possibilities for this recording:  sorting through all the sheet music in the piano bench, as it were.  Fortunately for many fans of long standing, one of the pieces they chose to include is Jones’ and Tabor’s grief-stricken duet on the Joy Division song “Love Will Tear Us Apart” (which they’ve been performing live for several years); the pain of this song–the words, the situation, the expression in the voices–is hard to shake.  Other kinds of grief appear among the songs chosen, such as that, in Tabor’s a capella rendition of “(When I was No But) Sweet Sixteen,” a ballad in which a young woman “gave the plough-boys freedom”, and winds up with a bairn with an unknown father.  Then there’s “Son David,” in which a mother loses two sons, because, in a Cain-and-Abel scenario, one kills the other and has to flee the country; June Tabor’s voice, repeating Oh, son David, my son David in the face of David’s lies about the blood on his sword, carries so much knowledge and agony that again, it’s haunting. (Ian Telfer’s fiddle, singing as it does–so much so that it hardly seems an instrumental break as much as another, wordless verse–has been playing in my head all week:  talk about being haunted!)

For all the constant haunting atmosphere of Ragged Kingdom, one can’t help but admire the musical range of June Tabor and Oysterband on this recording.  As is frequently their modus operandi, they have taken ballads and arranged them in such a variety of ways–varying tempos (“If My Love Loves Me” is positively danceable, while “The Hills of Shiloh” is mournful), moving from a 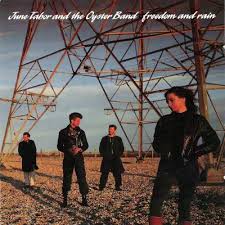 capella to acoustic instrumentation to rousing electric–that each song, while obviously related to its companions, is a surprise in and of itself.  This is why fans have been waiting for this new collaboration for 21 years, since the release of Freedom and Rain.

Back in April, Ray Cooper also called June Tabor a lover of words, saying she would not sing a song unless it somehow spoke to her.  In this CD, she and the Oysters have chosen well:  the songs speak to us as well.  Cooper said then of Freedom and Rain that they all were “very young.”  This effort is certainly mature:  all artists involved demonstrate a particular knowledge of how best to display their multiple talents.  I’m in love.

I can’t forget:  the lovely Tommy Shea, who first introduced me to Oysterband, says that the rendition of “The Dark End of the Street,” which closes out this CD, is absolutely holy.

If anyone’s lucky enough to be in the UK, June Tabor and the Oysters are doing a series of promotional concerts in the next several months:

I’d just about give my eyeteeth to see this show live.  Probably Tommy Shea would, too.

On Oysterband, Part 2:  What Chopper Said

On Oysterband at Ferneham Hall

On Oysterband on Cape Breton Island