On The Hunger Games

T.J., a young person I’ve known for several years, is now in my third period class, 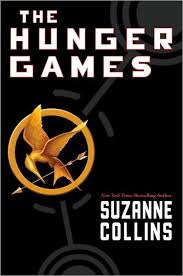 and recently demanded that I read The Hunger Games by Suzanne Collins.  I tease T. J. about not being a book-lover, but he insisted that these novels were, in his own words, “life-changing.”  I’m not generally a reader of young adult literature, but with that sort of recommendation, how could I possible refuse?

I’ve just finished the third in the trilogy, Mockingjay.  As I read the first, the book which gave the series its title, T.J. kept talking it up, asking at the beginning of every class how far I had read the previous night, what I thought of specific plot events, whether I liked the book.  Once I’d finished that novel, he had the second at the ready (and another person in the class lined up to read the first, thanks to our little discussions); then he had the third.  I always had to answer quite honestly:  I’m really not sure whether I liked these books–but I did become invested in the characters, and I did feel as though I had to read on.  Despite the brutality and bloodshed, I was sucked in.  I had to know what happened.  Especially after the cliffhanger of the ending of the second book, Catching Fire.

I don’t want to give things away here.  Suffice it to say that the main character, Katniss Everdeen, is thrust from the get-go into a horrifying situation:  the Hunger Games are a yearly competition staged with teenaged contestants

from the different areas of the country formerly known as the US; the games are a ritual punishment set up by the Capitol to display its power over the areas, and to prevent them from rising up as they had in the past.  Each of the districts, One through Twelve, must send a male and female tribute, drawn by lottery, to the Capitol every year, for an extreme version of the Survivor-like event where the kids compete to the death in an arena, televised to the entire country.  The younger Everdeen sister, Primrose, is selected, and Katniss attempts to save her by volunteering in her place.  Sent to the Capitol along with Katniss is Peeta Mellark, the baker’s son who once endured a beating in order to give her family bread.  It transpires as the story goes on that Peeta has feelings for Katniss and is attempting to protect her through making alliances with other tributes; Katniss herself joins forces with Rue, a young girl who reminds her of Prim.  When Rue is killed, this fuels Katniss’s drive to make it out of the arena alive, and strengthens her understanding of the cruelty of the Capitol, embodied by its leader, President Snow.

Over the three books, Katniss, who, thanks to a lifetime of deprivation, has a certain practical nature, becomes deeply cynical.  She makes new alliances, finds people to trust–and those people promptly die, usually in gruesome ways.  She agrees to certain bargains with those in power, and the rules promptly change.  She comes to discover that those who espouse freedom are really corrupted by power.  Asked by her commander, Boggs, about whom she would support as leader of a new government, she expresses uncertainty; he tells her,

“If your immediate answer isn’t Coin [the rebel president], then you’re a threat.  You’re the face of the rebellion.  You may have more influence than any other single person…Outwardly, the most you’ve ever done is tolerated her.”

Sure enough, President Coin attempts to do just that, and worse.  By the end of

the revolution against the Capitol, Katniss has become so entrapped by the sheer brutality of the power struggles around her that she nearly gives in and becomes part of them.  In a scene near the end of Mockingjay, she actually agrees to a plan of President Coin’s which is so repulsive that I, the reader, was sickened.

I’m not sure now how T.J.’s life was changed by these books.  Mine wasn’t.  But some long-held beliefs of my own were reinforced.  About how younger generations in this world are sacrificed to the power struggles between older generations.  About how constant brutality dehumanizes even the best among people.  About how blind so many of us are to the suffering of others.  About how calculating those in power frequently are in their bids to retain their holds on that power.  About how so much of the world is a scary place.  But… about how in the midst of all this, there are still pockets of beauty and kindness and decency and even love (as embodied first and last by the character of Peeta).  And how there always has to be hope.

Maybe that’s what T.J. has come away with.  I’ll have to ask him tomorrow.