Several years ago, on one of my adventures with my way-cool sister Susan, I bought a springform pan. 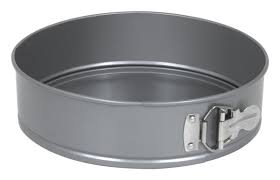 For those of you who are baking-savvy, you know that a springform pan is essential for making cheesecake.  Real cheesecake, I mean by that–not those silly substitutes that come ready-to-mix in a box, which can be made in a pie plate and don’t require baking.  Real cheesecake which stands two or three inches high, with straight sides.  You know the kind.  My springform pan looks very much like this one to the right, with a latch to release the sides once the baking’s done, and an entirely separate bottom.

I don’t make cheesecake all that often, though not because it’s difficult:  truly it isn’t.  I don’t make it all that often, because real cheesecake, in all its incarnations, is so incredibly delicious that, if left to my own devices, I will eat the entire thing.  Then, of course, I will come away from the experience about 20 pounds heavier.  Each time.

Still, sometimes nothing else will do in the world of cooking for one’s fantasy life.  Especially this weekend, when I had on hand five pounds of fresh wild Maine blueberries from the wholesale blueberry boy in Addison.  Of course, some are now in the freezer, for the winter, when hot dry barren blueberry fields will be but a memory, replaced by frigid snowy barren stretches of white.  My sister turned some of hers into blueberry soup, the recipe for which I will have to find, and soon.  I, however, decided that cheesecake was the route for me.  And not just blueberry cheesecake, or plain cheesecake with a blueberry topping.  No, somehow I got it into my head that a white chocolate blueberry cheesecake would be the epitome of cheesecake bliss.

Of course, I’d never made one before.  Of course, neither did I have a recipe for one amongst my books and print-outs.  However, I am not a cheesecake novice, so I figured I could tweak a more familiar recipe and see what happened.  I must say: the effort was a success.  My youngest child agrees, as she’s the only one who’s tried it yet.

So here’s my recipe.

10 oz white chocolate (use more or less depending on taste)

1.  Crush graham crackers.  Melt butter.  Mix together, along with sugar if using.  Press into bottom of springform pan.  (Some people like to line the pan with baking parchment or even tin foil.  I don’t.)  Bake the crust for 10 minutes in a 350-degree oven.

2. Using a mixer, beat cream cheese until fluffy.  Add sugar, salt and vanilla; mix well.  Add eggs one at a time and mix well.  Melt chocolate in a double boiler or microwave; mix thoroughly.  Fold in blueberries gently, so as not to crush.

3.  Spoon filling into springform pan.  Bake for 15 minutes in a 400-degree oven; then lower the heat to 210 degrees and bake for 60 minutes longer.  Run a knife around the sides of the pan.  Turn off the heat and leave the oven door open a crack, allowing the cheesecake in to cool slowly, for at least another hour.  Then remove the sides of the pan and refrigerate until serving.

4. In a saucepan, combine 1/4 cup sugar and cornstarch. Stir in water and blueberries. Bring to a boil, then simmer for 10 minutes, stirring occasionally.  Stir in lemon juice, allow to cool, and store in a glass jar.  When ready to serve, cut cheesecake, and spoon topping mixture over each slice.

I have solved my problem of eating all that cheesecake by visiting people and giving them pieces.  My friend Nancy, for instance:  I’ve traded her cheesecake for the use of her lawnmower.  It works!

I’ve also recently made chocolate Grand Marnier cheesecake for the women of Simply Not Done, and a chocolate amaretto cheesecake for dinner at the aforementioned Nancy’s house.  Both those recipes rock, too.

You can just call me the Cheesecake Queen.