On Painting, and Remembering

As anyone who has come within shouting distance since May knows, I’ve been spending all the good weather scraping and painting the exterior of my house.  It’s a big house:  the middle part is the original, built around 1770; generations of inhabitants since

have added rooms and ells and sheds, until the footprint is huge, though inside, the rooms are rather small–a veritable rabbit warren of a place.  Needless to say, it takes forever to paint.  The last time I did it, it took me two summers to get all the way around.  This time, I might get it finished by the end of September, and have next summer off.

There are two places, where ells join the main house, where I had to get on the roof to paint peaks.  There are two other places where I had to use an enormous extension ladder I borrowed from my lovely neighbors, John and Nancy (last time I painted up there, the ladder didn’t reach far enough–so I taped a paintbrush to a long stick…but I didn’t know John and Nancy then).  I don’t do heights very well…but today I’ve been working on the last part I need to get that high for.  It’s around the back of the house, where the shed and attic are.  I envision being done up there by, say, Tuesday, what with the scraping and painting two coats.

It was turning that corner, though, to the back side of the house, that got me thinking about my grandfather.  Specifically, about the time he told me that you always keep the front of your house painted and shingled for the neighbors, and the back is nobody’s damned business.  He was an awesome guy, my mother’s father; Victor Carey–his 113th birthday is coming right up, on September 5th, and as always, I’ll knock back a shot in his honor.  You see, he was the one who taught me about scraping and painting.  He taught me about changing oil in cars and in lawnmowers.  He showed me how to wallpaper.  He helped me fix my bicycle.   He and I frequently took care of my grandmother’s flower gardens together.  Sometimes he’d let me help when he worked on the plumbing or bled the fuel line to the furnace in his house (strangely, a house about the same age, and with the same sort of ells tacked on here and there, as this one). In fact, he was the man who gave me my first tools, and my first lessons in how to handle them:  hammers, wrenches, spades, power saws.  My grandfather always seemed to be working on something; and God love the man, he didn’t mind at all my following him around and asking him all those questions, even though I was seven or eight years old and in nearly all other ways a terrifically awkward child.  He had plenty of patience, and plenty of band-aids for when I screwed up. 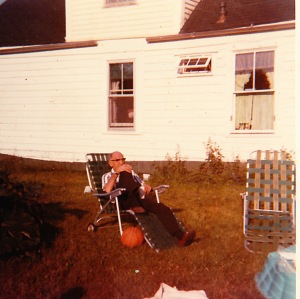 He seems to be relaxing here...and the back of the house doesn't look too bad!

It helped that my family spent the first five years of my life living in half of my grandparents’ house; they had three rooms and a bath on the ground floor, and the six of us sprawled out everywhere else.  Finally my grandfather deeded over a parcel of land next door, and my parents built their own house there…so we were removed by all of ten yards or so.  I think I spent more time across the way than I did in our own place.  Deep down somewhere I knew I was my grandparents’ favorite:  my mother always said my older sister Susan was too much like her for my grandparents’ taste, and Chris, in my grandmother’s words, was a destructive boy.  Jane didn’t come on the scene until later, so I’m not really sure where she fit in.  Probably I’d just established my claim by then, and that was it.

But that was a long time ago.  My grandmother died when I was 11, my grandfather when I was 14; though we moved back into their house then with my mother (she always liked it better than the one she’d built), the house was lost in litigation when my mother died.  So here I am, painting my way around my place–a house, I was saying to Susan the other day, that I’ve lived in longer than I’ve lived anywhere else in my life (22 years!)–thinking of Granddad.  I almost, today while I was up on the ladder, could imagine him sitting on the bank behind me, smoking his pipe, and gently critiquing my work.  Almost.  The smell of the pipe was that close.