On Changing Tires, and the Unexpected Rewards Thereof

I have a lot of experience changing tires on cars.  Not surprising, considering

This is what mine looked like...before.

that I’ve been driving cars legally since I was 15 (and not quite legally before that, but that’s another story for another time.)  I will say that I became proficient sometime in my twenties, when I was driving a little Volkswagen Fox that, for whatever reason, blew tires with more frequency than was comfortable, or even probable.  And it didn’t even drive all that fast, not really.

The biggest problem with that little German car, made in South America and imported from Canada (look, I don’t know, do I?), was that it came with a doughnut spare, rather than a full-sized extra tire.  The jack wasn’t all that great, either, but, as I was jacking up the car so frequently, I finally broke down and replaced it with a little hydraulic baby that worked like a charm.  Zip!  Up.  Zip!  Down again.  The doughnut fit under the tiny bit of carpeting in the trunk, in the world’s smallest wheel well; the jack fit in snugly beside it.  That is, it did–until the afternoon, crossing the border from Canada at Coburn Gore, when I was stopped at the INS station, and the US border patrol stripped that Fox down to the bar metal, taking up the carpets, pulling the spare out of the wheel well, emptying the contents of my duffel bag onto the side 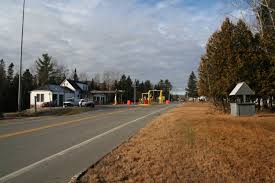 Yep. Right under that overhang.

of the road and going through the lint in the pockets (all while I sat on the front step of the station, mortified, because everyone passing by obviously thought I was a drug trafficker of the highest order:  Look at my blood donor card on the sun visor, I wanted to shout at them.  I’m a good person!) .   After that strip search, my poor little car never quite fit together properly again.  A couple of years later, when I rolled the Fox on the first icy driving day of the winter, the contents of the trunk, including the pieces of that hydraulic jack, ended up strewn throughout a marshy stretch of land in Stetson, and I never got all of them back.

As luck would have it, I’ve most frequently had to change flat tires in February, when hunching over jacks on the sides of the road is not only its most dangerous, but the weather is least conducive to any health or happiness while pursuing this otherwise fun and exciting activity.  Once I came out of school in the afternoon to find a flat rear tire on the old van; while I was cursing into the wind which brought the windchill to several degrees below zero, one of my students came out of his nearby house and offered to help.  By that time I was so furious that I told him it was best he go back in before he witnessed violent acts on my part, perpetrated against my car, that would profoundly shake his faith in mankind in general, and his English teacher in particular.  Being a good sort, he did; and I finished up my repairs without witnesses.  It’s usually better that way.

All this is by way of explaining how I came to be a tire expert.  Which stood me in

good stead one Saturday morning last month.  I was at the snowmobile club, making triangle toast for the monthly community breakfast sponsored by the Methodist church around the corner, when I looked up out the window to see an elderly couple taking their spare out of their trunk, and then looking at it rather helplessly.  I left the toast to my friend Nancy, and went outside to volunteer my services.  We should just call AAA, the elderly lady kept saying.  The man looked impatient, as though in earlier years he would have wrestled this car and its attendant flat tire to the ground, but now couldn’t get down to the tire’s level for any length of time.  Let me help, I said.  I’m an expert.  Needless to say, I wrenched those lug nuts around smartly (having no arm strength, I usually just stand on the wrench for a bit and let my weight do the work), jacked up the car, switched tires (no doughnut there, lucky people), and put that puppy back together in about five minutes.  When the man tried to pay me, I turned him down, so he demanded I put his money in the church box.

That was last month.  I hadn’t thought about that until this morning, when I pulled into the yard at the snowmobile club for this month’s breakfast.  When I got inside, that same elderly man–I have no idea who he is–brought me a present.  He and his wife were clearing out their house in preparation for selling, and they found something they thought I might like:

I almost cried.  The platter is lovely.  The greens and yellows are the colors of my dining room.  And it was so unexpected.  When you step out to help change a tire for people, because you just happen to be good at it due to all those years of practice, you don’t expect them to think about it a month later, and bring you a present.  At least, I don’t.  But all the same, it’s the one bit, early in the morning, that makes you believe in miracles.  I was where I was supposed to be, that Saturday morning last month–where I could do the most good; and I was where I was supposed to be this morning, where the most good could be done for me.