On the first day of summer break, I went up onto the porch roof to paint the gable end of the house.  This is just a general

The view from the porch roof

announcement from a person who is afraid of heights, and keeps going up onto high places, to cure herself of this fear.  It doesn’t work.  Even telling people I was going up there was counterproductive:  they kept saying things like “Don’t fall off!”  as though I hadn’t been worrying about doing just that all along.

It’s not vertigo exactly.  Sometimes there’s a bit of dizziness involved climbing up tall things, but not often.  Rather it’s a fear of what I’ll do once I get up there:  I will surrender control to gravity, which wants me to go down again, as quickly as possible, even if it means headfirst.  Even on the porch roof, which has a gentle slope, I fear tripping on things, rolling down, and plunging over the edge into the overgrown garden below–or with my luck, missing the garden altogether, and bouncing in an incredibly painful way off the brick walkway.  That’s why, the entire time I was up there, I sat, or crab-crawled from place to place.  Except when I had to stand for the very apex of the peak, and so wedged myself in the corner between the chimney and the wall.

I know there are people who do not fear heights.  Wire-walkers, for instance, 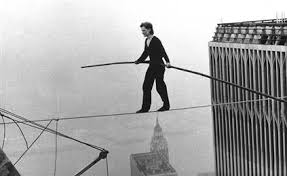 making the passage between platforms in the big top, or between the towers of the former World Trade Center.  My neighbor next door, Fred, did some chimney work on the roof of Kaw-Liga’s Antiques a few summers ago, and I would watch him, horrified, as he scampered around on the roof of his two-story building.  No, I am a person who prefers the ground.  Even as I’m scraping and painting the rest of my house–one story, that’s all, requiring nothing more than scaling a ladder–I hate leaving the comfort and reassurance of solid earth.  After all, I fall down enough there as well, but the resulting scraped hands and knees are far easier to deal with than my imagined broken bones (and I would break bones, have no doubt about that).

As I mentioned, I keep trying to get over this fear by climbing up onto/into high things.  Every year, the heathens and I climb up Borestone Mountain, for

Just hanging out with my friends...

example; there’s one place on that ascent which is particularly hairy for me, and I can still recall vividly the first time on it, when my smallest heathen had to talk me through it (put your hand here…now put your foot here…).  Two times now I have gone to the top of the Eiffel Tower, forcing myself to look down on Paris from every possible angle.  In Paris, I also forced myself to go to the roof of Notre Dame, and to the top of the Arc de Triomphe (a much smaller height, but not without its inherent dangers to those of us who are phobic).  In London I climbed all 311 narrow steps in the circular staircase inside Christopher Wren’s Monument to the Great Fire; once up on the viewing platform, I couldn’t help but feel that the entire pillar was going to topple with me on it, and I admit to staying up there for quite some time, primarily because I had to work up the courage to go down that damned staircase again.  Those

Guy's Tower, and my flag pole

circular staircases really get to me:  the one ascending into Guy’s Tower at Warwick Castle has given me palpitations now three different times.  The first time, once I’d made it out onto the top of the tower, I staggered to the flag pole affixed there, and sat, with my arms wrapped around it…until the employee overseeing that place asked me if I was all right.  Fine, I told him.  I’m just going to sit here for a bit.  The second time, I was with a school group, and, while I was forcing myself to look out over the view of Warwick itself, a rat of a freshman snuck up behind me and roared, jumping me so high I might very well have plunged over the rail to my miserable death.  Miserable death, by the way, was this boy’s key phrase that week: I don’t know how many stories Billy told of people plunging to miserable death from this high place or that.  Primarily within my hearing, of course.  Teenagers are evil like that.

Fortunately, this house only has two peaks which necessitate climbing on the roof.  The one at Ben’s end of the house is done:  scraped, two coats of paint.  Oddly, when I got up there, I found a message I’d left for myself:  the date of my last painting ascent, on the chimney.  Before I came back down to ground, I put this year’s date beneath it.  We’ll see how long it is before I go up there again.  As you can see, I put it off as long as possible.