This morning I nearly had a heart attack.  Or a hissy fit.  Or something.  Because I couldn’t find my notebook. 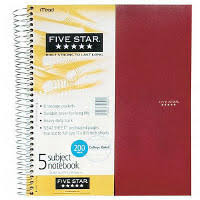 This is another neurosis.  I keep a daily notebook.  Just a notebook.  I like the Mead Five Star with the plastic cover (those last longer).  Five subject, 200 sheets, with section dividers and little pockets to keep stray bits in.  Every day I write the date at the top of a new page, and make a note of why I should remember that day:  someone’s birthday?  Some cool historical thing?  And then I write whatever needs to be written.  Lists.  Song lyrics.  Poem drafts.  Really awesome things kids say.  Sometimes just words.  Book titles.  Book authors.  Class notes.  Things I have in my head that I’d like to get out of there, so there will be room for other things.  There have been days, too, where my brain has been totally empty–and on those days, only the date appears.  January 25, Tuesday, of this year is a case in point:  Robert Burns’ birthday, but I can only suppose I didn’t have an original thought on that day.  Or an un-original thought, for that matter.  The page is blank.

It’s not a journal.  It’s not a diary.  I tried to keep both of those, long long ago, and found I could 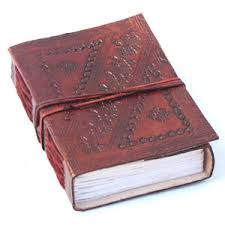 not do it.  Some days had tons of things happening, and I’d find that there was no time to write them down.  Some days had nothing happening, and I’d find there was nothing to write.  I’d fall behind.  I wouldn’t have an entry for weeks.  I’d feel compelled to fill a page when I did write.  Those journals and diaries started to make me feel guilty.  They became more of a chore than a joy.  Re-reading them, I realized:  what a self-absorbed whiner I was.

The first notebook came into being around fifteen years ago.  At the rate I fill them–some dates need more than one page; sometimes I skip a date entirely, for whatever reason–I use up one every 15 months or so.  (That makes sense, doesn’t it?  200 sheets, 400 pages.)  I have a shelf on the bookcase in my room at home where the used-up notebooks reside.  Every

once in a while I’ll flip through one, looking for ideas or inspiration, or just to figure out what was happening at a particular time in a particular year.  I’m constantly amazed at the things which seem to have held my attention at any given time.   What was going on Wednesday, January 5 of this year, when I wrote Rude messages with fruit at the bottom of the page?  Does it really matter?  What if I come across that, and it provides inspiration for some other line of thought?  A story, a poem?

This most recent notebook begins on November 23 of last year, which was a Tuesday, and the birthday of a former student, whose name appears on the top line.  Near the top of the page, I’ve written  He’s from Barcelona, 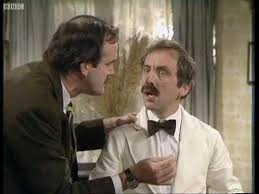 so we all know–all who are cool, that is, and who have access to the notebook–what I was thinking about at that time.  There was quite a bit going on that day, because November 23 goes onto a second page.  That’s where sonnet XXII from my Elizabeth Barrett Browning project is drafted, complete with scribbles and cross-outs and a break right in the middle, between lines eight and nine, where I’ve written Please try to understand before one of us dies.  Obviously, this was not a composition that was going well for me.  And there are times when John Cleese can express frustration better than anyone else.

In the writing class, I always have the notebook on my desk.  In my other classes, it comes out when I need to keep track of things–who presented a project, for example–or when someone says something awesome:  notebook-worthy.  It’s become something of a joke with some students.  Was that notebook-worthy?  they’ll ask if they say something especially witty or clever.  A good put-down?  How about this, from a girl on March 8, Tuesday:  I swear she has the brains of krill.  Now that’s a put-down worthy of Basil Fawlty, I say.  Another thing I’ve noticed?  Some of the more impressionable young people I see during the course of my day have also started keeping notebooks.  Smaller, and more compact than mine…but they’re keeping them.  That is awesome.  It’s even more awesome when someone will say something, and one of those students will quickly suck in a breath, then flip open her own notebook and begin scribbling furiously.

Oh, by the way:  my notebook has been found.  Apoplexy averted.

One of my favorite diarists of all time is Samuel Pepys, primarily because he’s such a pig.  Really.  And another of my favorites is Cecily Cardew, because she’s a girl who obviously knows the value of a fantasy life.  In The Importance of Being Earnest,

she won’t let Algernon Moncrieff read her diary, even when he discovers that they’ve been engaged for months before their initial meeting:  It is simply a very young girl’s record of her own thoughts and impressions, and consequently meant for publication.  If I could keep a diary like that–or if I could write like Oscar Wilde, with whom I’m madly in love–I wouldn’t need these notebooks.