This morning, when I awoke, the first thing I set eyes on was a print of Le Dejeuner sur l’herbe. The print has hung on my bedroom wall for as long as I’ve had this bedroom; waking up to it always makes me happy, because it’s a reminder that life is one big story.  And a strange one, at that.

Le Dejeuner sur l’herbe, by Edouard Manet (1863), is my favorite painting of all time.  Seriously.  Because of its story–or what I perceive to be its story.  That poor woman!  I’ve always wondered:  why is she wearing no clothes?  And why on earth don’t those men notice?  Whatever they’re discussing must be of earth-shattering importance.  Religion?  Politics?  The World Cup?  Her expression, too, is priceless.  She knows what these men are about.  She’s heard this all before.  Meanwhile, the second woman, up in the back:  when it’s time to wash, it’s time to wash.  Lunch can wait.  Interesting, though, that she, in her bath, is still partially clothed, while our main character, at the picnic, is sitting about stark.

Manet first exhibited this painting at the Salon des Refusés, the exhibition of 1863.  This was of course the venue for works of art rejected by the official Paris Salon.  The painting was apparently ridiculed by critics at the time, which leads me to think that they must have been stuffy boneheads.  Still, I suppose a naked woman so blithely hanging out with fully clothed guys could have been considered a bit improper.  A bit.  Fortunately, times–and critical opinions–have changed; the painting now finds its home in the Musee d’Orsay in Paris.

I, however, have loved this painting forever.  So much so, in fact, that one of my very first published poems, “On Considering Edouard Manet,” which appeared in Kennebec: a Journal of Maine Writing, takes this work as its putative subject.  The editor, the late Terry Plunkett, chose to run my piece underneath a print of the painting, which I appreciated no end.  This particular poem was my first attempt at ekphrasis–art about art.  Since then I’ve written about any number of other art works; but it all grew from my love of this painting.

Imagine, if you will, my joy, on my first visit to Paris several years ago, at being able to

Home, to my Manet

finally see the actual work at the Musee d’Orsay.  My art-savvy friend and co-worker Karen took me through a very crowded upper gallery in search of the painting (she’d been to the museum before and knew her way around), and when we found it, she had the great patience to let me sit in one of the conveniently placed chairs across from it and look for as long as I wanted.  The experience was breathtaking, rather like meeting someone I’d admired from afar for years.  If I had had to have a conversation with this painting, I know I would have stuttered and stumbled and come off sounding like a raving idiot.  I hated to have to leave.  Karen still is tickled when we talk about my first visit to my Manet.

I’ve been to Paris another time since then, and again in Karen’s company.  She has her favorites, too; when she goes to the Musee d’Orsay, she has to visit the van Goghs:  the cool thing about Karen and museums is that she visits paintings like other people 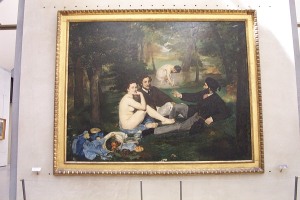 I took this photo from the chair

visit their friends.  Her enthusiasm is infectious, too.  This second time, I knew my way around this museum, and even though my painting had been moved to another, downstairs gallery, it was easy to find; it helped that the galleries weren’t even vaguely as crowded as the first time.  When we turned the corner and came face to face with my naked skeptical friend, I had to catch my breath.  I think this time, though, I could have held my own in a conversation with the painting.  We know each other now.

but across the river in the Louvre.  It’s Gabrielle d’Estrees and One of Her Sisters in the Bath, c. 1595.   We visited this painting one evening, and Karen explained all manner of the symbolism here to me–part of the fun of this painting is cracking the code.   She’s written a poem about the first time she took her daughter Bailey to see this particular piece; Karen’s a woman who enjoys witnessing first exposures to art works.