Saturday night at the MS 150 awards evening, my way cool older sister, Susan Fusselman, received a plaque for being a rider in the MS 150 for ten consecutive years.  Then Sunday morning we got up at 5:30, put on our bike clothes, ate breakfast in the cafeteria of St. Joseph’s College in Standish, and headed out onto the road again.

The MS 150 is one of the Maine (now Greater New England) Chapter of the Multiple Sclerosis Society’s largest fundraisers.  This year, bicycle riders raised nearly $300,000 for research to find a cure for this debilitating disease, and to support the people and their families who live every day with it.  There are usually somewhere around 400 cyclists who participate, some in teams, others, like my sister and me, by ourselves; the mission is to “create a world without MS.”  It’s a two-day affair, with routes beginning and ending at St. Joe’s each day, 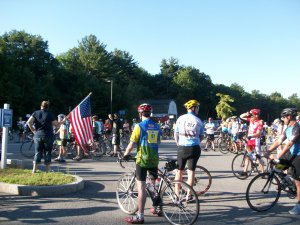 but covering, for the most part, different ground in Cumberland and York counties, culminating with a final push to the breakwater at Pine Point in Scarborough for those with the stamina.  There are some lovely roads with bridges over the Saco River, for instance; this year on the Sunday we rode through a covered bridge on the Hurricane Road somewhere between Standish and South Windham.  There are also some beastly hills, such as the one coming up on the village of White Rock in North Gorham, which bikers have to climb at the end of the ride each day before they can return to St. Joe’s to collapse.

I’ve been bicycling with my sister on this ride for nine years.  Depending on what shape I’m in–how much training time I get in the summer, for example–I can have a good ride, like this year, or a not-so-good ride, like last year’s.  I have had one totally spectacular crash on the route, maybe six or seven years ago, when I was forced by a pack of faster riders into a curb, and I ended up flipping off the bike, over a guard rail, and into the parking lot of the Hannaford’s in downtown Gorham–I got a great case of road rash out of that one, though I was more embarrassed than anything else; I got back up on the bike and finished the ride, mostly because I was so mad.

I joke about my training rides, up here in the hill country of central Maine.  My most common are

—The Tour de Dixmont: a quick, slightly-under-15-mile route that leaves my house, runs uphill on Route 9 to the cemetery, and then downhill again (how metaphorical) to the Simpson’s Corner Road, around to the North Road, across to the cow barns at Route 7, then back home again.

—The Tour de Tri-Town: same start, up Route 9, along the Simpson’s Corner Road, into Etna to Route 69, across to Plymouth Pond, then back to Dixmont on Route 7.  This is about 25 miles.

—The Tour de Southern Penobscot County: all the same again until Etna, but further to Route 2, across to East Newport, then onto Route 7 and home:  35 miles or so.

–The Tour de Tri-County: this time I leave home, ride downhill (and uphill and downhill and up) on Route 9 into Troy, then to Unity; take Route 139 to the Prairie Road, which turns into the Horseback Road in Burnham and eventually crosses the Sebasticook River before coming into beautiful downtown Pittsfield, where I can pick up Route 11 into Newport, then the old standby Route 7, which I can follow through East Newport, across Plymouth Pond, and back home to Dixmont.  This baby is about 55 miles.

Sometimes, if I’m lucky, I can truck my bike, a 15-year-old Trek 1000 12-speed, down to Susie’s in Freeport, and we can get some riding time in together before the MS weekend.  Her bicycle is also a Trek 1000, but six years old, and with 21 speeds.  Because of our differing gear ratios, and because she belongs to a cycle club (they have those in places where more people live, I’ve heard) and practices hill rides, she can take steep hills far better than I can; but I can outdistance her on flat stretches. 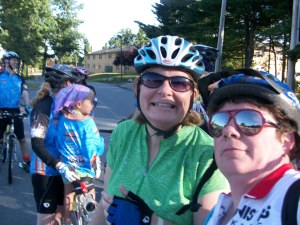 Us at the Starting Line

Then again, my speed on flats might have something to do with the soundtrack running through my head while I ride:  on the Saturday, I was pedaling to  “World of Good” by the Saw Doctors, sometimes singing it aloud; at one point, I considered changing songs, but I was in such a fugue state I couldn’t think of the words to any others.  On Sunday it was “Native Son” by the Oysterband, with the driving bass pushing my pedal speed; though I had to keep switching in my head from the Welsh to the English version, since I don’t know Welsh and obviously can’t sing it while biking.

I’m home.  I’m sore–especially my thigh muscles and my butt (bicycle seats are not good long-term friends).  I’m pleased with how well I did, and how much money I raised–though I could always raise more! Before I left St. Joseph’s this afternoon, where we finished the festivities by eating lobster, I registered for next year’s MS 150.  I will be a ten-year-rider then, too, and I’ll get a way-cool plaque like my way-cool sister got this year.  I will be riding for all my friends who live with MS, including my friend Denise in Houston, who last Friday took delivery of a reclining trike, and will be training to participate in the MS 150 as well.  Maybe we’ll get to ride together next year.  Now that would be great. 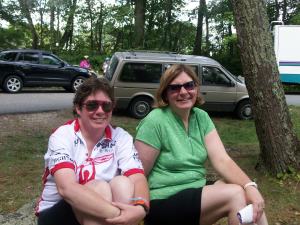 At the Limington Rapids Rest Stop